Although a seemingly ‘modern’ occurrence, Civil Ceremonies have been taking place in the UK since 1836.  But having a civil ceremony has become more socially and culturally accepted over the last 20 years.

Here’s a little historical context for you; it’s interesting – promise!

In Medieval Europe marriage was recognised as valid as soon as a man and woman stated they took one another as husband and wife, regardless of the presence of any witnesses. It wasn’t necessary to married by an official or cleric. However, The Church of England decreed in 1753 that in order for marriage to be valid they must all be carried out in an official, recognised religious ceremony. Any other form of marriage was abolished. This legalisation didn’t spread to Scotland and until 1940 leading to the popularity of “fast marriages” in Scottish towns on the border with England, Gretna Green being the most well known.

Thankfully, marriage is now a valid, recognised and legal activity not just for non-religious couples and not just in churches, with ceremonies taking place anywhere that the government will issue a license for. 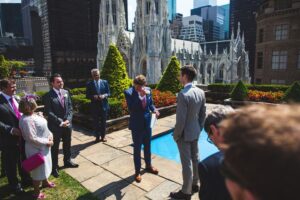 The essential difference between a Church and Civil Ceremony is the absence of any religious beliefs or dialect.  In Civil Ceremonies couples can choose to write their own vows. Now the traditionalists might feel this is a little dangerous, as essentially the couples can design their own promises on their own terms. That said, the writing of one’s own vows is an enormously brave and deeply personal act.

Civil Ceremonies are not just the celebration of two people uniting, but also a celebration of our freedom of choice. Where some might feel in awe of standing in the presence of God as they marry, others feel equal awe in standing on a mountain top, in a splendiferous room, in a town hall surrounded by those they cherish most. Plus there is the scope for poetry, letters to be read out, singing, dancing and any genre of music… What a wonderful privilege be able to express yourself on your terms.