Opting for a small and private wedding ceremony can be a difficult decision to make, particularly if you both come from large families. The reality is that someone’s feelings will be hurt by being left out.

Rather than perceive private weddings as a selfish choice, let’s consider the reasons why a couple might prefer to keep it small:

For some people marriage is not just about the two people, but also the support network around them and a public wedding celebration is a way of acknowledging that. But for others, marriage is uniquely intimate, profoundly personal and truly private. 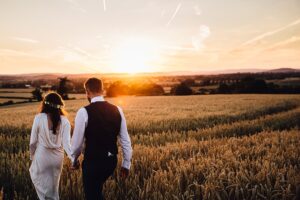 Private ceremonies have just as much right to be creative and expressive as more public ceremonies. Between a small gathering of witnesses you can still indulge in a few choice words to be read, songs to be shared, words of affirmation and encouragement given from your close ones.

The trickiest part may come with the decision to ‘keep it small’, it is therefore important to manage people’s expectations. It might be poignant to consider the feelings of people who will be disappointed not to be at your wedding and offer them a compromise – you could do something special together soon after your marriage. You may not be able to expect everyone to understand your decision, but you can ask them to respect it, and in return you can respect the feelings of disappointment that may occur.

Then of course, you needn’t tell anyone at all…how romantic!