Here at Capesthorne Hall we have had the privilege of hosting Hindu, Muslim, Chinese and Jewish ceremonies, to name a few. Whilst writing about the various marriage ceremonies available to couples today, we wanted to give mention to the special customs of a few faith specific ceremonies.

Hindu wedding celebrations can often last for several days. They can also be extremely diverse. Brides are adorned in the most spectacular and ornate attire and often have henna applied to their hands and legs. Sometimes the bride and groom will give each other a garland of flowers around their necks and, depending on region and denomination, the bride and groom may encircle a sacred fire seven times to represent each of their wedding vows.

One of the wonderful things about Hindu weddings is the faith’s strong respect for the Family. The Bride is seen to depart her birth family and become part of her groom’s family.  This is sacred and intrinsic to the faith, not to be taken lightly. 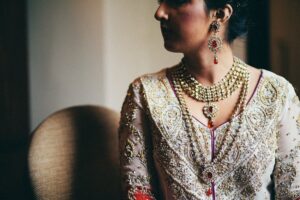 The actual Muslim wedding is known as a nikah and, in antithesis to our last blog on private wedding ceremonies, Muslim marriages can never be undertaken in secret. Like the Hindu ceremony, the Muslim faith recognises a wedding as a union of families and the sacred bond of man and woman.

One of the beautiful and key aspects of a Muslim marriage is that, according to the Quran, a married Muslim couple act as each other’s “protector and comforter”. Although the ceremony itself is simple, the public declaration of marriage is often made with a large feast, or walimah. In some cultures there will be a lot of dancing, noise and merriment. We have catered to a number of large Muslim weddings, with guests of 500+.

One of the most beautiful aspects of a Jewish wedding is the wedding canopy, better known as a chuppah, which symbolises the couple’s new home together. Adding further significance, the chuppah is held over the couple by four family members or friends in recognition of their support of the marriage. Different to the Anglican marriage ceremony, at a traditional Jewish ceremony the bride may not speak and only she receives a ring to her right index finger. The bride’s silence is symbolic of her acceptance and agreement. However at more open Jewish ceremonies the bride might respond with “ani l’dodi, v’dodi li”, which poignantly means, ‘I am my beloveds, my beloved is mine’. Again, Jewish weddings tend to be rather large with plenty of food, dancing and general merriment, often over a few days.

What is beautifully unique about a Chinese wedding is the Tea Ceremony, which is a formal ritual welcoming the couple into one another’s families. The couple kneel in front of their parents as a sign of respect then serve tea to both sides as well as elder relatives. During the ceremony parents may offer words of blessing to the couple.

A few things all of the above faiths and cultures have in common are the attention paid to wedding attire, particularly for the brides, grand scale decorations, large numbers of guests, the lengthy and joy-filled celebration and the importance laid on Family. All in all they make for extraordinary and memorable occasions. What better way to welcome in a marriage. [i]

[i] All information cited from https://en.m.wikipedia.org/wiki/Wedding